It’s been a year. I’ve sold a few books.  I’ve dabbled in self-promotion and found it a disheartening thing.  I’m a writer, not a salesman.  I had something to say and said it in a fiction, to soften it, to make it more appetizing, to be a waking up story after a long slumber full of unrealistic dreams.  We cannot dominate the earth and survive.  We cannot dominate other people and survive.  We cannot keep taking from our Mother Earth.  We cannot continue to put ourselves above all other living things. I am moving on, to talk more seriously. 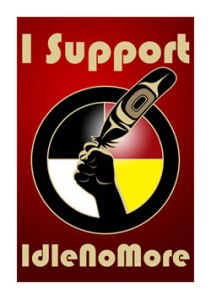 My thanks to Andy Everson for his artwork.
IDLE NO MORE is a grassroots movement in support of the People. It is for all of us.  It has been raised into public attention by First Nation Peoples because it is a contradiction to our own settler socialized, racist views of the past.  “Lazy Indians” will IDLE NO MORE.  But they were never lazy, they were just ignored.  It began in the hearts of four remarkable women-  Nina Wilson, Sheelah Mclean, Sylvia McAdam and Jessica Gordon.  These women regard changes to our legislation, the Omnibus bill etc., as an illegal and insulting misuse of power against other Nations.  Our First Nations.  The Nations that existed for thousands of years with a quality of life that was far superior to what we’ve accomplished in our four hundred year assault on this land, this Canada.
We have thrown the planet into unbalance.  We take from and dishonor Mother Earth. We think we’ve got it under control.  We think we are thriving.  But, we are waking up to find our lives are surrounded by illness, disease of the spirit, unjust resource sharing, corporate greed, political tyranny and corruption. Our systems of care are over burdened and shrinking, underfunded, while a few get rich and claim that their wealth will trickle down. But all that trickles down is the poisoned water, the tainted meat, the polluted air and, if we are lucky, a job; some task that undermines our spirits and feeds the monster that imprisons us.
The IDLE NO MORE movement is for us all.  It is a joyful gathering of humans that know we can stand against ruling powers that demean and belittle our laments.  They are popping up in communities, small and large, and they speak to the need to respect our Mother Earth because she sustains us.  McDonalds, Starbucks, Apple, Esso, Gap, Walmart, etc. don’t sustain us, they use the blessings of our planet and sell them back to us, as if we were not entitled, as humans walking upright on this planet, to what it offers for our survival. It is the dream we have been dreaming, of naming all things, dominating all things, believing we have created all things or at least, have been put in charge.  We have become sleep walkers.  You and I have earnestly done what we dreamed was rightful, but we are waking up and our First Nations brothers and sisters are here, at our sides, offering sustenance, a way of seeing the world that honors it, a way of being that is honorable and feeds our spirit.
They, under International law, must be consulted before legislative changes are made that affect their ability to hunt and fish and live.  They are never consulted.  Now these legislative changes affect us too.  We, the working people, the grassroots of our nations, are finding the ground cut from beneath us, our water polluted, our food tainted but we have no recourse.  We got what we “democratically” voted for.  It is not required that we be consulted. We gave them the power to decide.  But the First Nations People did not.
Now we settlers have become the recipients of the new age small-pox laden blankets, the trinkets, the thrust of ‘progress’ at all costs, the religion of the dollar and we have no treaty to hold up as proof of our rights to be consulted, only a promise that we can vote again in a few years, vote for whichever seems the lesser of the evils, and bury our dead, nurse our sick, feed our children with poison. Support your local IDLE NO MORE movement.  You have been invited to participate. Peace

Well…book sales are pretty slow. I’m an abysmal self-promoter though I Tweet and Facebook.  Both venues simply raised my awareness of other issues that are far more important than my little book, “Journey”.  I’m grateful for that but feel my tweeting on political/environmental/human rights issues that are strongly polarized is not in the best interest of self promotion. Although, in fact, my novel circles these issues and my opinions on them are consistent.

I’ve received awesome feedback on the novel and I love checking the status at Vancouver Island Regional Library.  That one copy has traveled up and down the island and has consistently had 3 or 4 holds on it all last year. But books sales are dreary.  Good thing I don’t depend on them.

One would think, being such an avid reader myself and a frequent library user (I certainly can’t afford to buy every book I read)  I would have noticed the lovely opportunities the library website gives for reviews and comments. Of course, now I have a book at the library,  and it is being read, I keep expecting a review or something.  I’ve never commented on the countless pleasures I’ve enjoyed reading favorite and new to me authors so it is rather ironic that I have such expectations of others.  Take note:  authors love being reviewed therefore I should review.

I suppose money is a good review but my small royalty cheque, though pleasing, was not half as rewarding as a positive comment on Facebook.  I’ve decided to write letters to my favorite authors – Louise Erdrich, Anne Tyler, Amy Tan, Jodi Picoult, Margaret Atwood and others – to express my delight with their words, the way they read my own psyche, my heart.  Perhaps they remember when a nice review fed their creative spirit more than a small royalty.